It is March 2018 and day 2. We have just arrived in Xiongxian, the forgotten backwater spot in China. Xiongxian is now at the heart of President Xi’s ‘Beijing-Tianjin-Hebei integration plan’. The “Jing-Jin-Ji” project is one of the President’s two main development initiatives, alongside the “One Belt, One Road” trade and infrastructure strategy.

A lot of this area will soon be soon be filled with President Xi’s futuristic vision and intensive state planning, such as ordering certain households in Beijing to relocate here. This area has now been land locked preventing anyone to buy here but is full of construction plants reforming this area.

The villagers we were about to record will shortly be relocated, and the land we current stand on is up for total renovation. Technically the music from this group would never be played or heard again on this soil ever again. GSM felt extremely privileged to be here as many people have requested the villagers perform, but since April 2017 and President Xi new plans, they have not played.

This made the perfect case for GSM to visit and meet the local musicians. For the recording we went into the village with a range of equipment including AKG Mics, Zoom H6, a range of video equipment and cameras. Four members of the GSM team completed the audio recordings whilst seven students from the Hebei University kindly helped us document everything visually.

The first set of recordings consisted two musical pieces called ‘Music for the Buddha’ performed by 22 musicians. We placed a stereo pair of AKG 414’s at the front with two Audio Technica 4040s at the back, all connected to the Zoom H6 in the middle with a XY capsule. 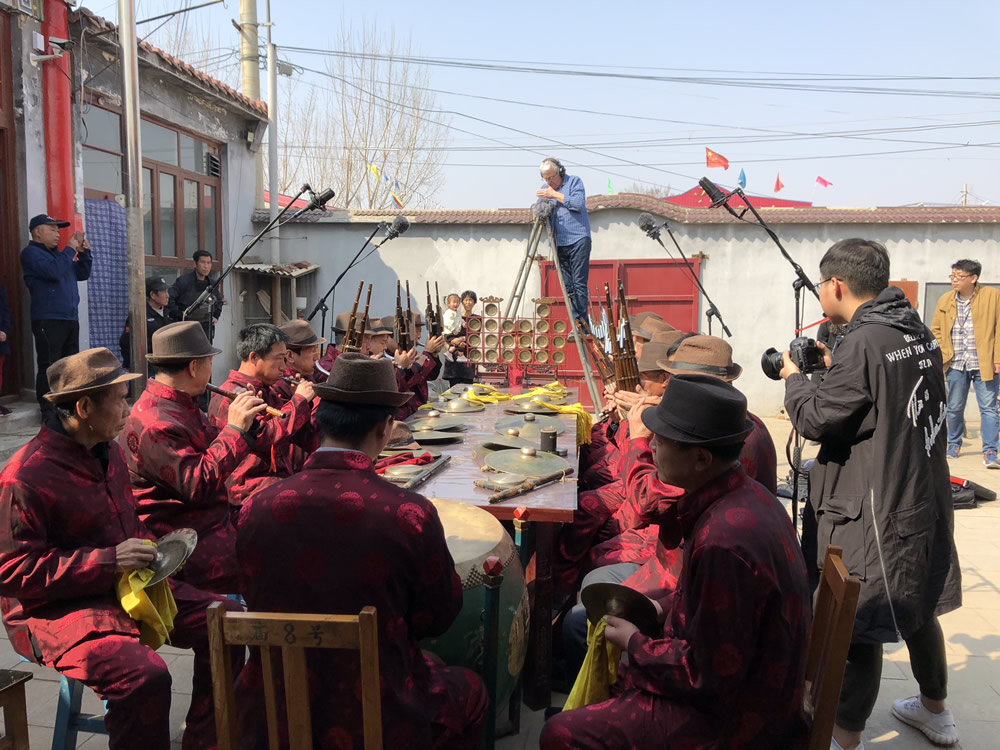 Recording outdoors always presents issues. We have always found it quite difficult to ensure to get the silence required for recording in this way, normally we are marred by chickens or goats, on this occasion it was a funeral. It was for an elderly member of the community. However, the people understood what was required and paused the funeral until we fished recording the first section, another GSM first!

We then proceeded with the next stage of recording at another venue respecting the requirements of the villagers and the funeral.