Rhys Sumner, working under the pseudonym Saint Diskette, is a 21-year-old composer and music producer currently based in Wigan, collaborating with artists across North West England. 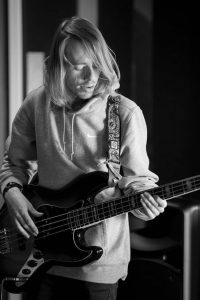 Rhys specialises in electronic music, namely the genres hip-hop, trap and drum and bass, and he recently graduated from a three-year music production course at UCLan in Preston. Notable for its percussive melodies and distinctive upbeat rhythms, Rhys’s music has a progressive quality that tends to arise through the layering of various timbres weaving in and out of one another, often developing into intriguing and beautiful soundscapes.

Recently, Rhys was selected as part of a team of ten musicians and artists who worked with Imogen Heap on a project titled Life of a Song, whereby the artists, working alongside Heap, had to compose, produce, mix, master and release an original song in just five days. The project culminated in a presentation and live performance in Manchester, and you can read more about it here – https://www.brightersound.com/imogen-heap-and-frink-frink/

We gave Rhys two weeks to create some original music utilising our sampler instruments from Uganda and Cyprus. We were interested in seeing how he implemented them into his working process, and we sat down to ask him a few questions about his new EP – Another Ceiling I Don’t Recognise…

COULD YOU DESCRIBE YOUR AIMS AND INTENTIONS AT THE BEGINNING OF THIS PROJECT?

In ‘Another Ceiling…’ I aimed to create three compositions that captured the sonic characteristics of both the Uganda and the Cyprus packs whilst pushing the material to use them in unique and interesting ways. Additionally, I intended to subtly showcase the capabilities of the instruments within the context of my own work.

HOW WOULD YOU DESCRIBE YOUR WORKING PROCESS?

I usually start by working with either the percussion samplers, or the Akogos, because they have a really nice resonance and they’re quite easy to write hooks and melodies with. And I follow that by layering all the instruments together to create really interesting textures. Usually by the time it gets to the end of the track I don’t like what I’ve come up with, then I take that and I’ll reprocess it as a whole, and then edit that into a new instrument. I’ll then play over the top of the original track using this new resampled instrument, in a sense resampling and recycling my own material. I keep doing that over and over again until I end up with a final product that I’m happy with.

WHAT DAW DO YOU USE?

I use Logic Pro X and the EXS24 samplers. I also use audacity and a freeware software called ‘PaulStretch’ for manipulations.

HOW DID YOU FIND USING THE GSM SAMPLERS?

What I like about the instruments is that they’re quite sonically rich, especially the Uganda pack, because there’s such a variety of instruments. For example, you’ve got the Akadindas with really resonant low frequencies, and some nice earthy middle register notes, then you’ve got instruments like the Akogos that are really plucky and percussive and shimmery, so when you start layering them up they start to make this wonderful and warm, almost surreal sounding song. Then once they’ve gone through the processes I’m used to working with when composing and producing, you start getting some interesting and really grainy textures.

You’d think just because of the region or country that they’re from they’d sound typically like that region, and the music would have an obvious edge to it. So if I use the Cyprus sounds, the Bouzouki for example, you’d think it’d give it a certain sonic quality, but when you start changing it and resampling it, suddenly it’s such a versatile lead. I used it as one of the lead instruments in one of my songs and you’d never be able to tell, because it’s so subtle. My worry was that as soon as I started using the percussion samplers from Cyprus, you’d immediately be able to hear and tell that they were Cypriot instruments, but as soon as you start layering it up with everything else you can make something really different. They’re really versatile and you can do anything with them.

HOW DID YOU INTEGRATE THE GSM INSTRUMENTS INTO YOUR MUSIC?

I try to use the samplers in the most abstract sense, but try and arrange them in a way so that they’re so subtle in the final production that it makes sense, and they sit just right. For example, sometimes when I use the environmental recordings, I’ll use them as bed textures but other times I’ll re-sample and blend them together and then use that as an instrument, like a pad. I’ll also really manipulate things like samples from the Akogos and flex them out to make long crescendo risers and builds.

IS THERE ANY PARTICULAR INSTRUMENT OR SAMPLER THAT YOU FAVOURED OVER THE OTHERS?

Definitely the Akogos, with and without the rattles, but in terms of the new pack I really loved working the Rockenspiel, it was really fun! It cuts through the mix really well and you don’t have to do much in terms of processing to get it to sit well. I’m always struggling to work with high melodies that’ll sit right and lift the song to the next level, but the rockenspiel worked really well for that, it’s like the secret ingredient to that high range. I also thought I wouldn’t like the Bouzouki, because I rarely use stringed instruments in my productions, because they don’t blend to well with my work. It was a nice surprise really, with a bit of editing and by ducking out some frequencies suddenly it sounded like a nice undercut lead line, almost synth-like.